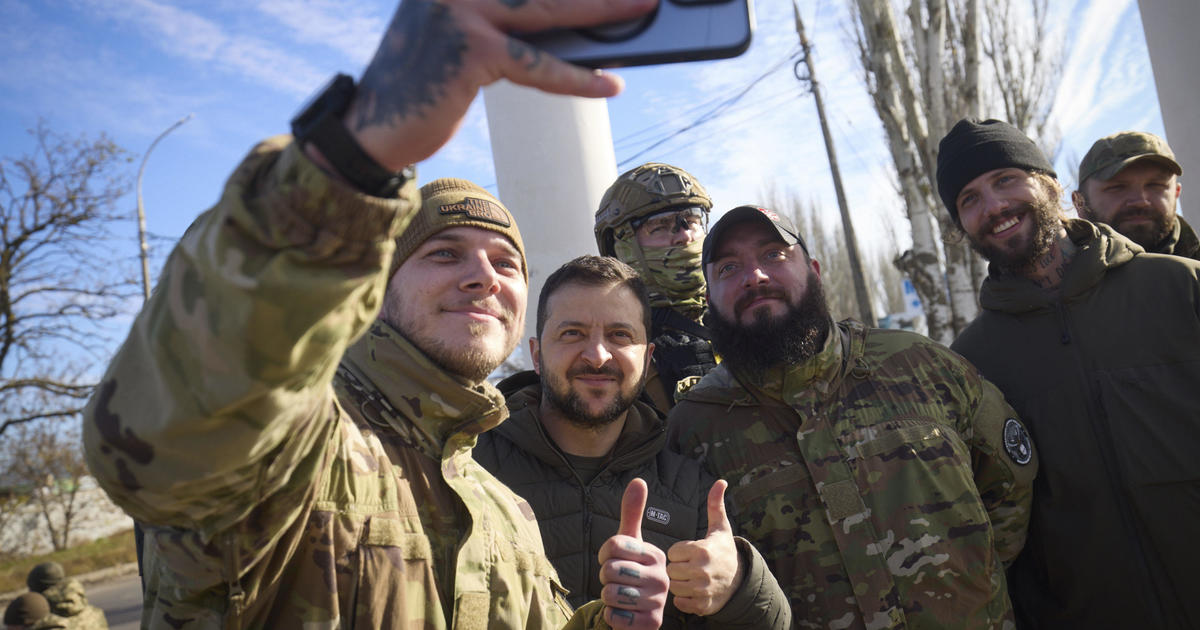 Kherson, Ukraine — President Volodymyr Zelenskyy made a surprise visit to a key city in southern Ukraine on Monday, just days after it was liberated from Russian occupation. Zelenskyy arrived in Kherson Monday morning and told soldiers and civilians that the liberation of the only regional Ukrainian capital that Russia had managed to wrest control of since February represented “the beginning of the end of the war.”

Zelenskyy found a city full of jubilation at Russia’s retreat, but just starting to grapple with the horrors inflicted upon its people during weeks of occupation.

Our CBS News team got a military escort into Kherson over the weekend, and the convoy still had to proceed with extreme caution. The road was still littered with shattered vehicles and deep craters from explosions after Ukrainians battled for nearly nine months to reclaim the city.

But the children of Kherson clearly couldn’t wait any longer to emerge from hiding.

“We’re going to play hide and seek in those trenches, once we’re allowed,” a boy named Kiril told CBS News.

Zelenskyy also wasted no time in coming to celebrate the city’s liberation, showing up on Monday despite ongoing shelling from Russian troops entrenched less than a mile away.

We asked the president if he really believed Russia’s retreat from Kherson was the beginning of the end of the war.

He lauded Ukraine’s army, and vowed that it was “coming to all the occupied territories” still held by Russian forces in the south and east of his country.

Ukraine, Zelenskyy said, was ready for peace, “but peace for all of our country, all of our territory… That’s why we’re fighting against Russian aggression.”

For the residents of Kherson, Monday was about tasting victory, and freedom. Last week, they could have been killed for singing the Ukrainian national anthem. Now they were out in the streets singing it at the top of their lungs as their national flag flew again over buildings across the city.

But the joy belies unspeakable trauma for many survivors. Oleksander showed us around his mother’s house, where he said 40 Russian soldiers had lived for months.

His mother’s clothing was scattered all over the floor, and as we poked through the mess, he recalled how at one point, he couldn’t stand it anymore, so he simply asked the Russian troops to leave. They answered by pointing their rifles at him, handing him a shovel and telling him to dig his own grave.

Breaking down in tears, he told CBS News it was only at the last minute, after two nights of digging, that the Russian soldiers seemed to change their minds and let him live.

He may have been lucky. Zelenskyy said on Sunday night that “investigators have already documented more than 400 Russian war crimes, and the bodies of both civilians and military personnel have been found” in Kherson.

“In the Kherson region, the Russian army left behind the same atrocities as in other regions of our country,” Zelenksyy said in his nightly video address. “We will find and bring to justice every murderer. Without a doubt.”

Walking back outside his mother’s house, Oleksander pointed at a neighbor and said: “There goes one of the collaborators.” He said it was one of the Kherson residents who helped the Russians occupy the city.

We asked him how he could go on living with them.

“I don’t know,” he said, “and I don’t know how they can live with themselves.”

Chris Livesay is a CBS News foreign correspondent based in Rome.